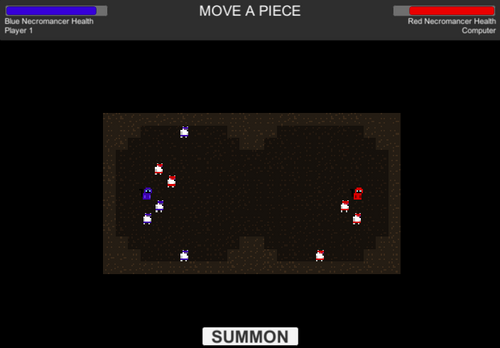 I had very little time to work on this, only about 8 hours total from Friday night through Monday. I initially started out with an idea of a turn-based game where each side took turns sliding each of their pieces all the way in one direction, removing enemies that were hit. I quickly realized this wouldn't work with the "Your Life is Currency" theme, so I modified it.

This was where the idea of dueling Necromancers came in. I also realized that moving each piece in one direction was boring without really intricate level design, so I switched over to moving individual pieces like castles in chess, and having each piece attack a neighboring enemy piece. The Necromancers had health and they could spend that health to summon more undead.

I wrote a quick AI using minimax and alpha / beta pruning. This was a learning experience.

I managed to get that working in a shockingly short amount of time (I think I spent more time making Unity builds...), and the AI became extremely hard with only depth 2 searching. I couldn't beat the game!

The graphics in the game were taken and modified from my Legend of Sigmund game ( https://fredric.itch.io/sigmund ). I did this very quickly at the start of the project and it saved me a ton of time. I used DG Tweening, like I have with other projects, but found out this trick for coroutines in Unity.

This let me loop through all of the 'actions' taken each turn, animate a shake or move using DG Tweening, and then go to the next piece all in a few lines of code in coroutine. I was really happy to learn about this! I need to use a similar strategy for some of my scripts.

The reception to the game was mostly "this game is great, but it would be playable if..." I think the biggest faults were in the movement and combat of the turn-based game. You quickly get into a stalemate where you take turns summoning undead, which is boring. I should have spent more time play-testing and finding ways to break the stalemate.

This was a good jam. It was quick, but I learned some new tricks, and I feel like I made a complete *thing* even though it isn't all that fun.

Quick turn based game where you attempt to defeat a rival necromancer with a horde of undead!